Belgians are big savers. According to recent figures released by the National Bank of Belgium (BNB), Belgians have reached a record high in average household savings, with figures reaching 290 billion euros in aggregate regulated savings accounts. On average, the household savings ratio in Belgium is 12.6%, which by comparison is just over double that of the UK, where households save 6.2% of their disposable income. Belgians have traditionally saved a lot, yet even in an era of zero or negative interest rates on savings, the lack of spending is beginning to become problematic and even a hinderance to the national economy.

Globally, the Coronavirus pandemic has hurt economies everywhere. With firms in the UK and Europe also having to simultaneously adapt and create contingency plans to prepare for the end of the Brexit transition, businesses face the situation where they need to use alternative methods to attract clients and re-establish confidence in their company. In Belgium, that means trying to encourage people to spend more and save less at the same time as rising unemployment, weakening job security, and people generally tightening their belts and restricting spending to the bare necessities.

Despite this, firms must not lose hope: Now is the time to seek new opportunities. Businesses are responding, many are offering their goods and services in a different way. In Belgium, where consumers have traditionally been less open to online commerce, increased time at home in front of a screen enables households to be more susceptible to e-commerce and advertising. Businesses must use this time to improve communication and dialogue with their clients to reestablish trust and retain brand loyalty. Getting active online and keeping your customer base up to date on changes will help businesses in the long run and hasten the adoption of a more digitalised economy.

Belgium government support has not been as forthcoming as in the UK. However there are a variety of loans and tax deferral schemes that have been put in place to weaken the damage felt by Belgian firms.

Click here for Belgium’s government website to see how your business can benefit from the support available: https://www.belgium.be/en

Here at the British Chamber of Commerce, we will continue to update you with the necessary information to help all our members to succeed. We are all in this together, and with the right plans in place, consumer confidence can be restored. BritCham offers support, guidance and specialised coverage for both Brexit and COVID-19, including webinars, workshops and events that will give your firm the tools it needs to navigate through this challenging period.

See our website here for more details on how we can help you: https://www.britishchamber.be/

It’s obvious that young people are the one’s with the highest stake in the debate over the future of Europe. BNG Chair Amelie Coulet argues that to engage the younger generation in the UK, referendum campaigns need to be more positive.

Last week, I spoke to an event organized by the Young Professionals Network of the Council of British Chambers of Commerce in Europe (COBCOE) in London about “Brexit: what would it mean for young professionals?”. It was a great opportunity to show the multinational perspective of the BNG group (Brussels New Generation) on this important issue: what would Brexit actually mean for all the young working Europeans, many of whom have studied, lived and worked in more than one EU member state or may be currently working in a country that is not their own.

Since the start of the campaign, we have heard the views of many politicians and business leaders both in the UK and outside. However, it is the younger generation who will be living with the consequences of the Referendum, no matter the outcome. Yet, current polls show that young people below 35 years old do not share the same views than the older demographic. A recent poll found that 25% of 18- to 34-year-olds would vote to leave the EU compared to 46% of those aged 55 or older, with the age group in between remaining relatively neutral. But more importantly, the younger generations are also much less likely to vote: this British Election Study poll shows that more than 22-23% of 18- to 34-year-olds would not vote while they are less than 8% among the 56 to 65 age group. 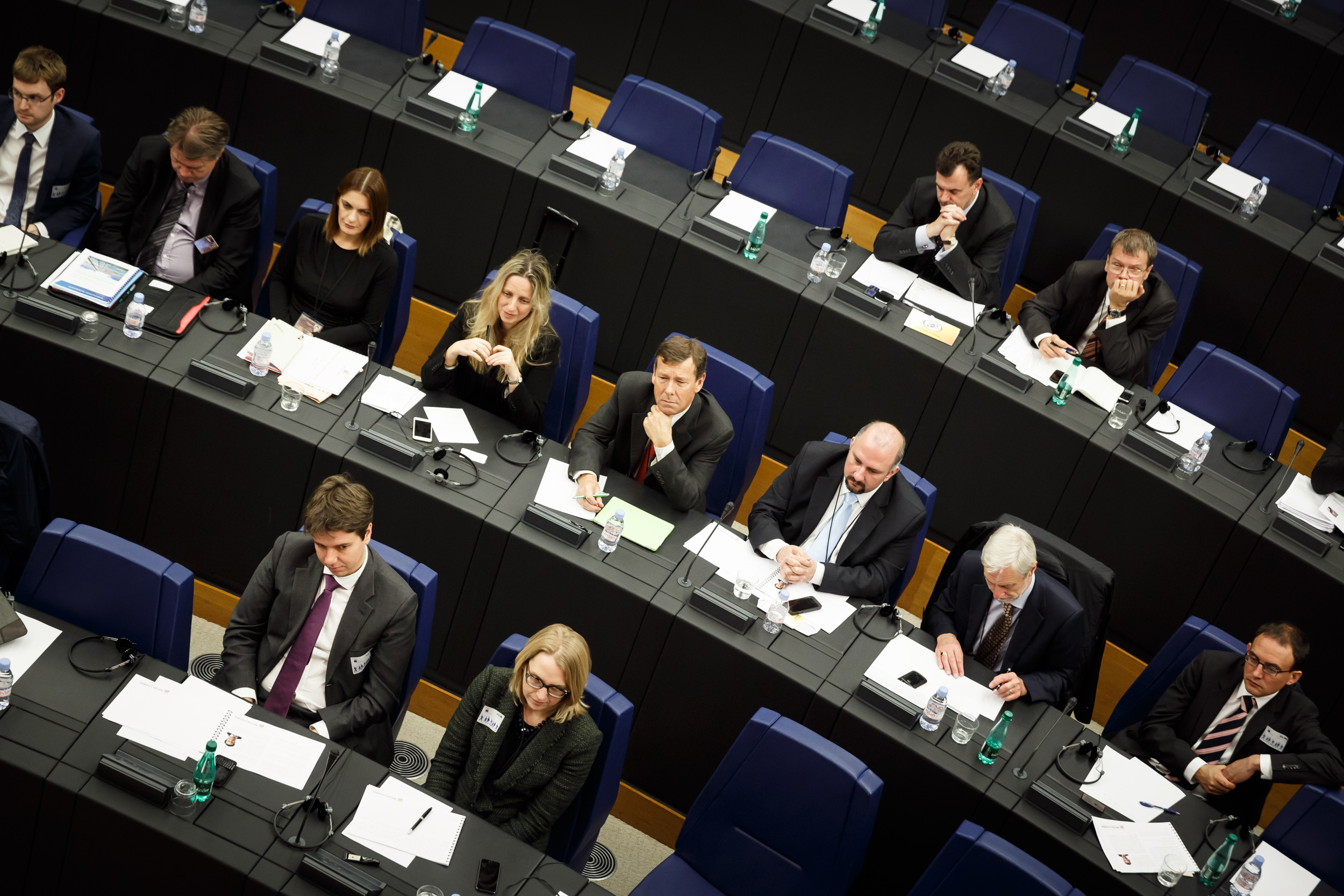 There are many interpretations as to why a generation who would rather keep things the way they currently are, would take the risk of letting other voters with opposite views take control of the debate? Bad timing of the Referendum has been pointed out as one of them (end of year exams, summer holidays, etc.). From our perspective as young professionals, we believe that our generation does not share the same view of the EU than those who remember the UK before it joined in 1973. Young professionals are more mobile and ‘pan-European’: they have long taken advantage of Erasmus programmes, the rise of low-cost airlines in a free movement area, or the growing cross-border job opportunities offered by international corporations. They do not see the EU in terms of costs vs. benefits but more as something they have always lived with, whether they agree with all its policies or not, or whether they found it to be a successful or a dysfunctional project. This ‘sense of normality’ may be one of the reasons why they feel less strongly about the issue than those aged 55 or older.

Negative campaigning is also the dominant trend at the moment: from being overtaken by migrants if the UK stays, to the collapse of the entire British economy if they leave, it is difficult to find positive arguments coming out of the ‘IN’ or ‘OUT’ campaigns. Yet ‘Project Fear’ will not work with young people on the long-term. As the Scotland experience has taught us, if it may work to keep the status quo on the short-term, it won’t convince voters that they have made a conscious choice nor will it close the debate: following the Referendum on Scotland’s independence, SNP recorded a historic landslide general election victory and the idea of Scotland leaving the UK has resurfaced facing the possibility of a ‘Brexit’.

Both sides of the campaign need to better inform and involve younger people in the debate, not scare them off. The younger generation, and particularly the young professionals, also need to make their voice heard. For that, it is everyone’s role and responsibility to encourage young people to take part in a campaign that will strongly impact their future.

The Referendum will be held during the 2016 Glastonbury music festival: its organisers have quickly reacted to inform their audience about how they can vote while still enjoying the festival. We should all do the same with all our young British friends and colleagues.

The UK’s referendum on EU membership represents a major landmark in the history of European integration. The British Chamber in Brussels sits in the political heart of Europe and have direct access to the EU insights that are critical for business. The referendum then is of huge importance to us, as it is to Britain and Europe. This week our Chief Executive officer, Glenn Vaughan, writes to outline what the chamber will be doing leading up to the all important vote.

Membership of the EU is vital both for the UK and the future of the EU and the UK Referendum is an opportunity to give momentum to EU reform. That’s why a clear majority of BCCB members believe the UK should REMAIN in the EU. So what is the British Chamber doing?

We will be playing to our strengths to ensure that our members have access to the best possible information on the referendum and ensure our Brussels partners and stakeholders understand the importance of reform and renewal for Europe.

We want to ensure that our EU partners understand the importance of the UK’s reform agenda and that this is good for Europe, not just the United Kingdom. The referendum provides an opportunity to inject momentum into the ongoing European reform process.The 3 things that our members say are most important are:

We have already been actively building on this agenda, most recently in our debate with Herman Van Rompuy recently and we have much more already planned including “Evolving Europe: the Brussels debate” in conjunction with COBCOE (British chambers of commerce from across Europe) in the European Parliament on 17 November.

I’m also delighted that we’ll welcome the US Ambassador to the European Union, Anthony Gardner, at the end of the month and we will have ambassadors from more countries visiting from around the world before the year end. In addition, our 2016 calendar is well on the way with the schedule almost full for the first half of next year.

If you have concerns or questions regarding the referendum; our Future of Europe briefings should be your first port of call. Keep an eye on our calendar and make sure you register early to guarantee your place.

I look forward to seeing you there.