Although those headlines that tell you robots are going to steal your job can be disheartening, the overarching message that came from last week’s panel was a positive one. Though the term Artificial Intelligence may seem scary, the panel reminded us that we actually already use A.I everyday – when we search Google, choose from recommendations on Netflix or Spotify or find more similar products on Amazon. Overall, the discussion made it clear that as automation advances, it will be the most human-centric skills that become the most valuable. 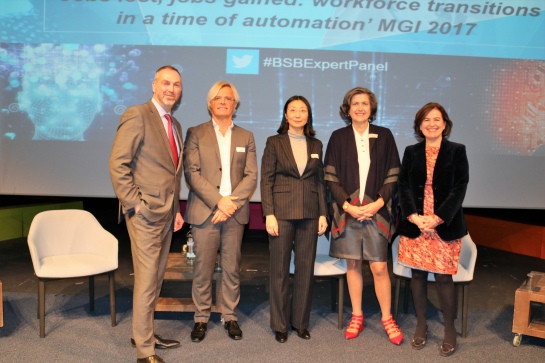 On the 12th February, our Chief Executive Glenn Vaughan chaired an expert panel discussion on automation at The British School of Brussels, in collaboration with AmCham Belgium. Discussing the ‘Jobs Lost, Jobs Gained: workforce transitions in an age of automation’ McKinsey Global Institute report from 2017, the panel provided a great insight for the future workfoce – the students from BSB and other local schools – as well as the current one – parents and corporate representatives from across Brussels.

Key note speaker Jacques Bughin, Director of MGI and co-author of the report, gave the message that instead of fearing this new technology and worrying about what jobs it might take away, it is better to view these new advancements as opportunities and seize each one. Jacques’ confidence that it is not that today’s jobs will all disappear, that instead they will transition as they have done in the past and it is up to us to decide how these transitions unfold, was an aspirational takeaway for the audience.

Catherine Stewart, Senior Advisor at Interel Group, was clear that there are still ways to stay ahead of the automation trend. Though machines and A.I are advancing in cognitive tasks related to memory and learning new information, they lack our people skills and emotional intelligence. Catherine’s advice to the future workforce, and also to the current one, is “learn to be clear, constructive, creative and adaptable, learn to listen and to challenge in a positive way” in order to thrive.

‘The high-skill, high-pay jobs of the future may involve skills better measured by EQs (a measure of emotional intelligence) than IQs’

Andy Haldane, Chief Economist at the Bank of England

Angela Dong, Senior Vice President Human Resources, Research & Innovation, Solvay, is witnessing the A.I transition first hand, and advised the audience that in fact, not everyone needs to master the potentials from A.I and new technology, but to stand out you will need to understand what it is that it can help you achieve.

Melanie Warnes, Principal and CEO of The British School of Brussels, concluded the panel discussion in agreement with the other panellists that the way the future workforce interact with each other, human to human, will be crucial, and that an optimistic view on the topic remains important.

Though automation may be on the rise, the take home message of the night was to take a positive outlook – the robots won’t beat us yet!

‘The future is not predictable, it is to be shaped’