The British Chamber welcomes the EU and UK transitional agreement allowing additional time for a deep and comprehensive future relationship agreement to be negotiated. We also, welcome the UK and EU’s joint intention to achieve a post-transition relationship that satisfies the mutual interests flourishing between them.

• the European Council to deliver a negotiation mandate which enables the broadest and deepest possible relationship between the UK and EU to be agreed,

• the UK to present, without delay, its written proposals for a deep and comprehensive future relationship with the EU27 as soon as possible, and that this proposal contain sufficient details on how trade between the UK and EU in each business sector will function, so that EU and UK business have enough time to understand how it will need to adapt and minimise disruption to customers, supply-chains and the workforce.

The British Chamber of Commerce | EU & Belgium welcomes the declaration by the European Council that “sufficient progress” has been made in the negotiation of the UK withdrawal from the EU, and its decision to move to phase two. We urge the Commission to proceed swiftly with the negotiations on a withdrawal agreement incorporating the terms of the joint report of 8 December. We also urge the Council to grant the Commission a mandate to open negotiation on a transitional period at the earliest possible occasion. We stress that the withdrawal agreement which includes the transitional arrangements should be adopted well ahead of the 29 March 2019 deadline. We further welcome the Council’s intention to start discussions on a negotiation mandate for the future EU-UK relations early in the new year.

Our member companies have a common interest in the success of Europe as a whole, including both the EU and Britain. We hope that the EU27 and the UK will negotiate a deep and comprehensive agreement that supports the invaluable relations between the two partners.

First and foremost an orderly withdrawal agreement must be reached, which includes a transitional period that allows all economic activity to continue unhindered during and after Britain’s withdrawal from the EU. The transitional arrangements shall ideally maintain the status quo and ensure the application of the acquis communautaire in the UK for the period necessary to grant businesses certainty, until the full implementation of the future relationship.

With little time available for extremely complex negotiations and ambitious objectives, we are calling for profound and constructive progress in the weeks ahead on negotiating the transitional arrangements and a framework for the future. We will continue working with the negotiating authorities and national business representatives across the UK and EU27 to forge common understanding that a strong and close future relationship is in the best interest of everyone.

The chamber has been serving the international business community here for over 100 years and we are committed to the long term – continuing to be the ultimate Gateway to Europe. Our members are small to large businesses from Britain and across the world – all with a stake in the success of Europe and its economy. They employ 1.2m people in the UK alone, with at least as many again in the rest of Europe. 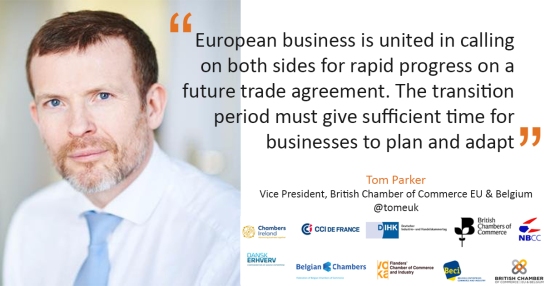 An alliance of northern European Coastal Chambers accounting for 70% of EU-UK trade urge British and EU negotiators to create clarity on a future trade friendly relationship as soon as possible now that sufficient progress has been made.

Countries from the northern European coastal area have always maintained exceptionally good trade ties. Trade between the United Kingdom and the other 6 European Union countries in this area amounted to 344bn EUR in 2016, accounting for 70% of the total EU-UK trade. The English Channel, located in the middle of the North Sea area, is for example the world’s busiest shipping lane, with more than 500 vessels passing through the strait on a daily basis, as well as being a key transport link between the EU and Ireland. A sudden and chaotic disruption of trade in this region would have a substantial economic impact that should not be underestimated.

The northern European Coastal Chambers were therefore pleased to learn last Friday that sufficient progress has been made in the first phase of the Brexit negotiations. The Northern European Coastal Chambers now call on the United Kingdom and the European Union to move on to discussing the outlines of a future trade friendly EU-UK relationship that fully respects all aspects of the integrity of the Single Market as soon as possible.

The northern European Coastal Chambers also believe a realistic transition period is needed to provide time for companies to adapt to the new EU-UK trading relationship. A status-quo like transition period – announced with sufficient notice – ensuring the UK remains in the customs union and the Single Market for the duration of the transition period, with all the appropriate rights and obligations, would be best to provide business with the highest possible degree of certainty and predictability.

The British Chamber of Commerce in Brussels is calling on both Britain and the EU to focus on jobs and the economy in Brexit negotiations.

“We need the best possible agreement between the UK and the EU, that takes into account the highly interconnected nature of our economies. If we’re to avoid unnecessary damage to jobs and businesses across Europe we’ve got to have clarity, certainty, and practicability” said Tom Parker, chair of UK-EU relations for British Chamber.

Given the complexity and time-sensitivity of the negotiations, we believe this will be a two step process and that the two parties should agree as soon as possible to an amicable divorce, with the rights of residents, financial settlement, and the sensitive questions related to Northern Ireland being resolved. They should then agree to a transitional arrangement that provides legal certainty for a clearly defined period during which a satisfactory and comprehensive agreement on the new EU-UK relationship can be reached.

Delivering a seamless business environment between the UK and EU27 will be very complex, particularly given the limited amount of time available. That’s why the British Chamber has established a set of 10 guiding priorities, which we believe must underpin the future agreement. “Ongoing access to the single market, seamless customs arrangements and availability of skilled labour are absolute musts for any future UK-EU partnership” Parker added.

About the British Chamber

The British Chamber is unique: an international network that connects your business with other businesses, a wide spectrum of national and European policymakers, and customers and clients. We can facilitate your relationships with the European policymakers and Institutions that your business needs to reach. We are a platform for developing your business whether just starting up or well established. We are the gateway to a global trade and investment business solution. Our network of business support services and partnerships with the UK Trade & Investment (UKTI), the Belgian regional investment agencies in Brussels, Flanders and Wallonia, and the European (COBCOE) and global network of UK Chambers of Commerce gives you the direct contact and connections you need to succeed.