Usually, I leave my apartment in Brussels around 7 am. However, “usually” is a difficult word to use since there is hardly any routine that structures a day in the “quartier européen”. Depending on the week, my workplace is either in Brussels, Strasbourg or my home country Germany. This involves a lot of travelling and means that a well-organized calendar is vital.

This particular morning, I got to my office after a few hours of sleep and a cold shower. I had arrived from Hannover by car the night before and had been welcomed home by a broken boiler in my apartment. Nevertheless, I had to shake off any exhaustion and prepare for a busy day at the European Parliament.

There was one major story today: the failure of the exploratory talks to form a new government in Germany. After several weeks of negotiations, the liberal FDP announced that they had ruled out any coalition with the CDU, the CSU and the Greens. National politics deeply affect my work at the European Parliament which is why I keep close track of current events.

After an hour of reading the newspapers, checking the mails and preparing the agenda for the day, I left for the first committee session. I have the honour of being the Chair of the Committee on Foreign Affairs. Here, members from all political groups get together to discuss the EU’s foreign and security policy.

One of the tasks of the committee is to strengthen the EU’s relations with the parliaments of third countries and the parliamentary assemblies of other international organizations. Our committee provides a platform for delegations from all over the world to exchange their views with the MEPs and to discuss common interests. Chairing the committee is exciting and challenging at the same time since the agenda is very diverse.

At today’s session, I was happy to welcome the Indian ambassador Mrs. Gaitri Issar Kumar for the debriefing of the EU-India Summit which took place on 6 October in New Delhi. With India’s growing influence in the world, it is of great importance to hear the Indian voice in the European Parliament. Both the Indian representatives and the MEPs emphasized their ambition to strengthen cooperation regarding trade and civil society. 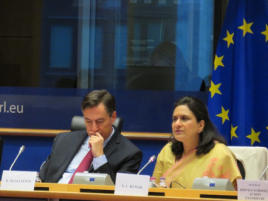 After several other points in the committee, I rushed to an interview with Radio Free Europe about the upcoming Eastern Partnership Summit in Brussels.

The Eastern Partnership is an initiative of the EU involving the countries Armenia, Azerbaijan, Belarus, Georgia, Moldova and Ukraine. By strengthening cooperation with its partner countries, the EU is able to foster democracy, stability and prosperity in its neighbourhood. However, I also try to draw attention to the challenges and shortcomings of the reform process in the region. In my interview, I underlined that the EU should offer more support for those countries that successfully implement reforms while reducing support for countries that fail to meet the requirements.

After a quick lunch-to-go, I was very happy to welcome the former British foreign minister Mr. David Miliband in my office. He now is the CEO of the International Rescue Committee, which provides emergency aid and long-term assistance to refugees. A topic which is more important than ever. Personal exchanges with politicians, representatives of NGOs and ambassadors are vital for gaining a realistic picture of the situation in other countries.

In another three-hour session of the Committee on Foreign Affairs, we discussed the pre-accession assistance for Turkey. The EU offers financial support and expertise to all accession candidates. The goal is to enable these countries to adapt to European democratic and economic standards. In any case, the willingness to reform needs to be the precondition for EU support. The situation in Turkey is worrying!

Due to the news from Germany, I had been invited to join a panel discussion addressing the failure of the exploratory talks and its implications for the European Union. The end of the negotiations is unfortunate. After a complicated start, the parties had come closer and closer to an agreement. I also regret the end of the negotiations because all four parties are pro-European. They know that a strong EU means a strong Germany. During the discussion, I could highlight that Germany will remain a reliable partner with a functioning caretaker government that continues to work towards the successful future of our European Union. 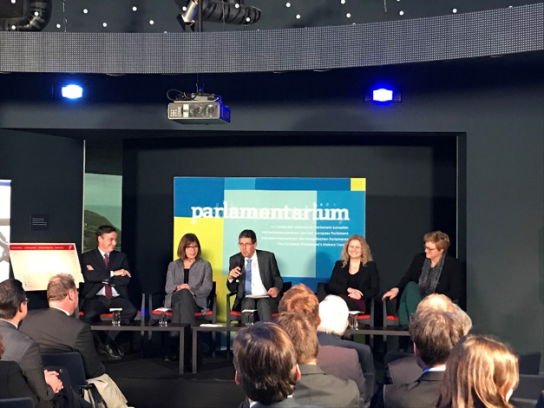