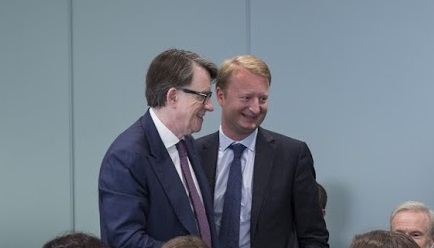 2015 was a busy year for the Business Development Committee! Our Chair, Olivier Van Horenbeeck tells us what’s next for 2016 and how they plan to build on a great 2015.

To write that the chamber’s Business Development Committee grew and developed immensely in 2015 would be an understatement. The group successfully delivered 40 events in 2015, compared to 12 Business and Trade events the year before. So to give you a preview of what’s in store for members of the chamber in 2016, it only makes sense to first take a look at what went on in 2015.

The past year saw the introduction of three brand new initiatives under the Business Development Committee: Diversity Dialogues, Business Trainings, and the Strategic Business series, each of which are being continued and developed further in 2016.

Our Strategic Business Themes offers high-level briefings and debates on topics such as innovation in high value manufacturing, the development of future cities, the rising inequality in Europe, the advancements of the digital economy, and the implications of the upcoming UK referendum on business. We also revisited these topics during our first annual London Visit, where we met Lord Mandelson and Kenneth Clarke amongst many other key influencers and decision-makers on the UK’s political and commercial scene. Make sure you don’t miss the second edition this year!

The Strategic Business Themes perfectly complements our ongoing Ambassador Hosts series, where we in 2015 had the pleasure of hearing from regional Minister Presidents Magnette and Bourgeois, respectively, as well as Deputy Prime Minister Jan Jambon. With the outstanding support of Ambassador Rose continuing in 2016, we are expecting to welcome further high-level Belgian decision-makers to the chamber, and a date for Deputy Prime Minister Kris Peeters has already been confirmed.

The Business Trainings were introduced as a programme of interactive half-day courses with clear learning objectives, covering various soft and hard skills topics under leadership development, business administration, and communication skills. The initiative, led by Maria Laptev, and its ‘by members, for members’ approach has been very well received, and with an already full schedule lined up for this spring semester, we are now planning ahead for the autumn calendar.

Diversity Dialogues was launched in October at a very well-attended discussion and networking session, and with the feedback from that gathering we now have a framework for a first full year of Diversity Dialogues, with an event expected to take place at least once a quarter. Read more here from Rosie Halfhead, Chair of our Diversity Dialogues Working Group, about what’s in the making.

There were many new Business & Trade initiatives in 2015, but also a consistent delivery of high-quality seminars by our existing Tax, Finance & Legal Task Force under the chairmanship of Marc Quaghebeur. In 2016, you can look forward to sessions on the practical business implications of new legislation such as the Belgian tax shift, data privacy law, social security reductions, pensions for the self-employed, and much more. We are also looking at offering a 4th edition of our annual Expat Financial Affairs conference, this time in a slightly revamped format.

Last, but certainly not least, we are looking to further boost the chamber’s Trade & Investment activities, which are supported by Glynis Whiting. These include our existing Accredited Service Providers programme and annual Golden Bridge Trade & Export Awards, as well as new initiatives to facilitate bilateral trade and be the essential support network for UK exporters and investors into Belgium. We will also look to link some of our activities across the Business & Trade streams more closely with each other, for instance by combining our 2nd annual London Visit with the Golden Bridge Awards Gala in November.

As Chair of the Business Development Committee, I am looking very much forward to continuing all our great work in the year to come, and I hope to meet you and your colleagues at our upcoming events.

Thank you to James Pearson from the British Chamber team for contributing to this article.